Benidorm - Hiking to the peak of the Sierra Aitana


Hiking on the Sierra Aitana Peak 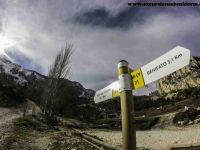 Otherwise known as the rooftop of Alicante, the Sierra Aitana covers an extensive area and rises to a height of 1.557 metres above sea level. It is the highest peak in the Marina Baixa area and in the Alicante Province.  It is the place where “Benidormenses” and locals go to enjoy the snow in the winter months without having to leave the province.

The mountain range is extensive and the hiking routes are many. Most people start from the Port de Tudons along the PR – CV20 or start the route from the Font de Partegat in Benifato.

How to get to there.
To start the route from Benifato follow the CV 70 road to La Nucia. Continue on this road in the direction of Alcoy until you reach Benifato.
Just before the village there is a road on the right which is signposted PR-CV21. This asphalted path will take you to the Font de Partegat the start of the route.   The route is NOT suitable for everyone. It covers approximately 11 kilometres, an uphill climb for which you will need to be equipped with hiking boots and thermal clothing in winter.

A narrow path opens up in the rock and vegetation and the path changes to an unpaved forestal path. Some areas along the route are quite dangerous, such as the Passet de la Rabosa.

To begin the route take the path marked “Sender Botanic del Passat de la Rabosa”. This path passes through a shaded stony area of great botanical importance.  The Font de La Forata is approximately one hour into the route, here various paths meet, one of which is the path from the Port de Tudons. You will be able to see one of the Ice wells on the mountain range and the Penya Forata which is named after the perfect hole eroded into the rock. 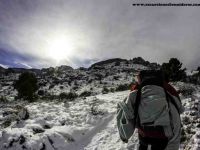 To follow the route to the summit you must pass the Passet de la Rabosa. This consists of a series of cracks in the mountain that have to be passed with extreme caution, especially if there is snow or ice, which can make the pass even more dangerous. Once you have passed this you will find the Simas de Partagat a series of faults and chasms that divide the mountain. After that take the path on the right which will take you to the peak of the mountain.

After a short walk, you will see a pile of stones indicating the highest point in the Alicante Province, 1.557 metres above sea level. This is not all together correct, the highest point is actually inside a military base, to which non-military personnel have no access.  It takes about two hours to reach the summit of the Sierra Aitana.  Practically the whole of the Alicante province can be seen from its peak, areas such as Serrella, La Aixortà, Sierra Bernia, Sierra de Mariola, Puig Campana & the Cape of Santa Pola, plus many of the coastal area such as Altea, Villajoyosa, El Campello & Alicante. 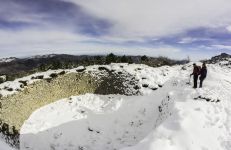 Once you have recovered your strength it is time to begin the descent. There are two routes to descend, you can either go back down the route you came up or follow in the direction of Benifato along the crest of the Sierra.  If you take this route, the path takes you along the cliffs and other mountains such as the Aitana Oriental (1547 metres) and the Penya Alta (1505 metres) which are not difficult.

The path takes you to Collado de Tagarina , at the crossroads take the path on the left towards Benifato, which will take you back to the Font de Partegat. This path passes through an area with protected flora known as Runar dels Teixos and past another ice well.
The route to the summit takes 5 hours to complete, including stops to rest, eat or take photographs.