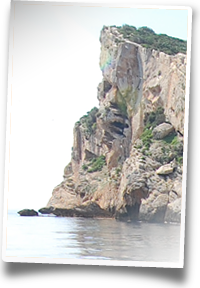 Benidorm Island is just two and a half nautical miles from the most cosmopolitan Spanish tourist resort.
It is centred in front of the Canfali, a headland which separates almost equally the two enormous fine sand beaches, the Levante and Poniente, the most envied treasure of the whole area. The surface area is just six and a half hectares, 350 metres long, 260 wide and reaching a height of 73 metres.

The twenty minute journey to the island is made in boats, known as “swallows”. These travel back and forth to the island all day.

The island is triangular in shape, can be clearly seen from any vantage point and has converted the surrounding landscape of the coast, to picture perfect.

We cannot forget to mention the myth concerning the island. Roldan, son of Princess Bertha, brother of Charlemagne fell in love with a beautiful young girl. The girl had a mysterious illness that had condemned her to death. She could only be saved if the last rays of the sun could pass the enormous Puig Campana Mountain. Roldan did not hesitate and armed with his sword “Durandarte” he attacked the giant mountain. The piece of rock fell into the sea forming the island.

The legend , like all legends is beautiful, but geologists affirm that the island, along with the smaller island La Llosa is a continuation of the neighbouring Sierra Helada mountain that continues down under the sea and surfaces again forming the two islands. The smaller island of La Llosa is almost completely submerged, at its highest point it is only 6 metres above the surface and its base is 30 metres deep.

Both islands are important marine reserves, protected because of the high ecological value to the area. The plant life and birds that nest on the island are protected, for example the Audouin gull and the cormorant amongst others, some of them making their nest in the cracks and caves of the cliffs. The island is a paradise for divers as moray eels, octopus and sargo take refuge around its rocky base. 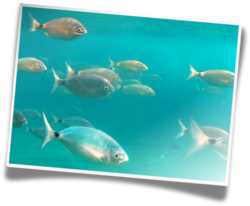 There is a path that enables you to walk to the top of the island.  You can stay as long as you like on the island returning on any of the boats that depart (check last departure time from the island). The boat trips includes underwater viewing areas that allow you to explore the waters around the island. These are included in the price.

A restaurant opens daily, offering one of the best paellas in the area. The island is not inhabited but at the beginning of the 19th Century a few hundred people fled to the island to escape a cholera epidemic in the area.
Watch our video of the excursion